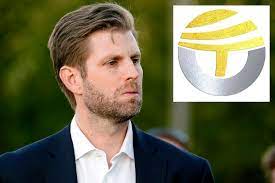 The family of the 45th President of the United States Donald Trump is going to sue the management of the cryptocurrency project TrumpCoin. It is a meme coin created in 2016 to support Trump in the election.

On his Twitter, the former president’s son Eric Trump called the TrumpCoin team crooks and threatened them with legal consequences. The presidential family will seek a ban on the project’s activities.

“Attention fraud: it has come to our attention that someone is promoting a cryptocurrency called TrumpCoin (TRUMP). This cryptocurrency, which has nothing to do with our family, was launched without our knowledge or permission, and we are against its use. We will take legal action,” Eric Trump wrote.

What exactly his family did not like in the little-known cryptocurrency, the son of the former president did not specify. However, it is known that as a well-known critic of cryptocurrency, his father was in favor of strict regulation of crypto-assets.

TrumpCoin representatives responded to Eric Trump with a screenshot from their website. “Trumpcoin.com is not owned, operated, maintained or otherwise affiliated with Donald Trump, The Trump Organization, Donald J. Trump for President Inc. or any other entity owned and/or operated by Donald Trump or any other affiliate,” the screenshot reads.

“We believe this is a misunderstanding that has put us in the crossfire,” a spokesman for the project told CNET. He noted that his team has repeatedly stressed that it is in no way affiliated with the Trump family.

The coin was created to support Donald Trump’s campaign

The TRUMPcoin was created on February 20, 2016 to support Donald Trump’s campaign before that year’s presidential election, in which he defeated Hillary Clinton. As of Jan. 25, the coin is trading at $0.23, nearly four times its January 2018 high of $0.81.

The current market capitalization of “Patriot Cryptocurrency #1,” as its developers call TrumpCoin, is about $1.5 million, trading at just over $8,200, and just over 6.6 million coins in circulation.

At the same time, former U.S. first lady Melania Trump decided to join the cryptocurrency community. Donald Trump’s wife launched the sale of her own NFT (non-mutually exchangeable tokens) — the only lot is a picture of Melania Vision.

Zuckerberg looking for a new owner for Diem