The Sentiment team pointed to an alarmingly high correlation of Bitcoin and the S & P 500. 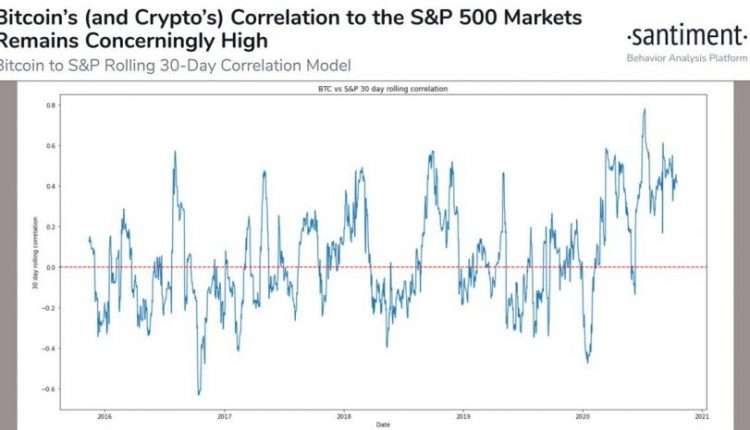 Over the past few days, the correlation of Bitcoin and the US stock indicator S & P 500 has intensified again. This is an alarming trend, according to analysts of the Sentiment team.
Their report says that now the US market is stagnating in connection with the upcoming presidential election.
The Federal Reserve announced the launch of a new business stimulus program. However, the date of the start of the injection of capital into the economy is still unknown.
The nervousness in the country of traders is increasing, as they are not sure that the market will begin to grow after the election and the Fed’s moves to stimulate the economy.
If the financial sector support program does not give the expected result, and the S & P 500 begins to decline, then Bitcoin also faces a rollback.
The largest digital currency amid the crisis around the OKEx exchange fell sharply. Then she recouped a little, rising in price to $11 454 on Sunday, October 18.
Trading in the United States ended this week with a minimal increase in the S & P 500 (up to 3,488 points). According to analysts, the influx of capital into high-tech sectors was supported by BTC, which allowed the coin to play a little back.
Bitcoin will only be able to “shoot” if its dependence on the stock market is minimal, Sentiment said in a report.
Experts added:
For a long period of time, when COVID-19 became entrenched in mass consciousness, the correlation between the two markets (S & P 500 and Bitcoin) was abnormally high. Falling below zero will be an encouraging bullish sign.

Binance “burned” 2.2 million BNB for the…